The Report on the Results of Discussions

Yet in December 2020, “Youth Cooperation Center of Dilijan” NGO has organized online discussions on the topic “Youth after the War. Challenges, Needs, Solutions” which was attended by 31 young people from Shirak, Syunik, Aragatsotn and Tavush regions.

The aim of discussions was to take out the changes that have taken place before and after Artsakh War on September 27, 2020 in youth everyday life and lifestyle. As well as expectations, challenges and its coping solutions, find out youth needs in post-war period.

The results of the discussions have been analyzed and a report was prepared, which presented their pre-war and post-war value changes in crises and in general, their necessary knowledge and skills, plans for the future and future ideas. As well as the role of CSOs and local self-government bodies involving young people and implementing more targeted programs for them. The enterprise was implemented within the framework of program “DATA. Data for Accountable and Transparent Actions”.

On May 5, the report was presented to the DATA project consortium partners in online format. It was presented that in the crisis, epidemic, pre-war and post-war situations, the young people used the values ​​of patriotism, unity and innovative spirit for themselves, at the same time mentioning the rooting of the negative phenomena of intolerance and hatred.

The report also addresses how crises have affected young people in their education, employment, other areas, and how they see ways to overcome them. It was pointed out that in order to increase the participation of young people in decision-making and involvement levels, the role of CSOs and NGOs is important and they should take into account the needs and requirements of young people drawing up their programs. The importance of volunteering was also mentioned, which was especially obvious during the war.

It is worth mentioning that in the post-war situation, in the internal political uncertainty have created uncertainty in young people, especially in single decision-making processes, such as staying in Armenia or not. Add to that the psychological feelings, the loss of relatives, some unsolved border issues, post-conflict stress. Some young people mention that having a stable and secure environment is a prerequisite for thinking about the prospect of staying here or deciding to leave. Indeed, many young people see their future in Armenia.

Young people mentioned that they need a number of skills and abilities to apply in post-crisis daily life: such as quick orientation, resource management and mobilization, strategic thinking, formulation of tasks and goals, communication and other skills.

The proposals that were registered as a result of the analysis of the discussion were also presented.

During the meeting, it was decided to hold similar discussions among the youth again, to find out value changes in their lifestyle and other context of the youth of other regions in the post-war period. 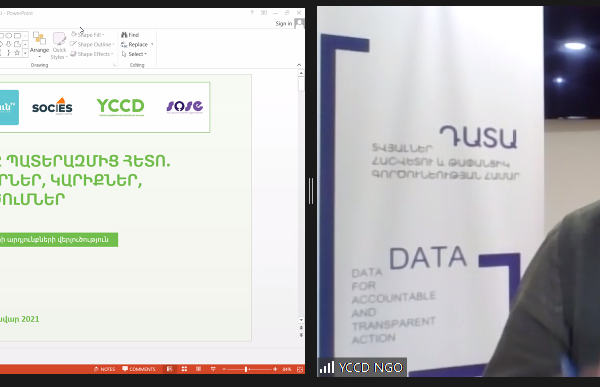 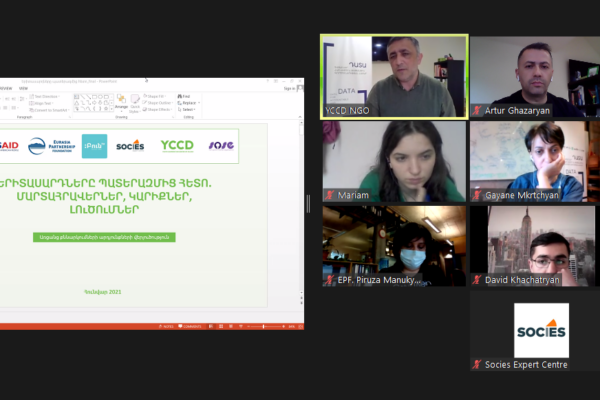 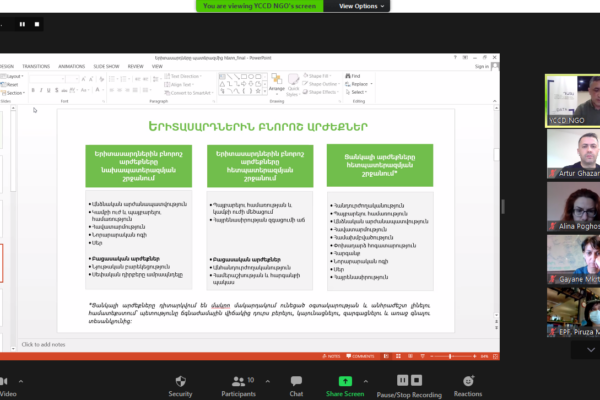